About Us | Our History Part 1 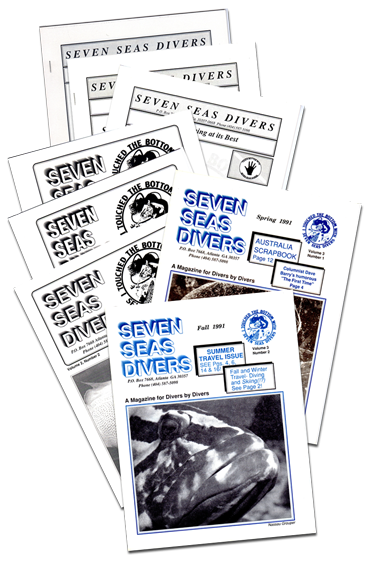 In 1986 an instructor and a couple of his Divemasters decided that Atlanta needed a different model for recreational diving. As a result, Seven Seas Divers was born.

So, Jim and his crew at 7SD (as it was known) designed a "dog-and-pony" show that would take scuba training to recreational centers and private health clubs. The quality of their product was soon recognized and the word spread fast.

7SD brought scuba to some of the most elite private health clubs in the city including the Ravina Club, the Turner Athletic Club at CNN, the Wildwood and Buckhead Athletic clubs and several top private golf clubs.

In 1989 Chuck joined the ranks and took on the responsibility of editor, publisher and all-around "repair guy". Together they purchased a complete line of masks, snorkels, fins, BCs and regulators, aluminum tanks and a slightly used compressor.

Soon there after the first edition of the Seven Seas Divers "hard copy" Quarterly Magazine was published and mailed out to the existing membership. Ahh snail mail... Needless to say those first few years were about scuba training (sometimes two classes per month) and scuba charters (about 10 per year).

There were several favorite locations including Bimini with guaranteed clear water, Dolphin encounters, a 130 ft. drift, the 7SD secret initiation certification ceremony and of course Jim's Bimini punch. Grand Cayman with the awesome wall diving - the 500lb Sweet Lips at the wreck of the Oro' Verde, Cozumel and the restaurant with the lions (Casa Mission) and of course Nassau and the sharks.

There were the annual intercontinental trips - who can forget the trips to Barrier Reef and the Coral Sea on Mike Ball's Spoilsport, Papau New Guinea, Palau and Truk Lagoon (Chuuk), Matangi Island in Fiji, the Great Whites in South Africa... and the list goes on.