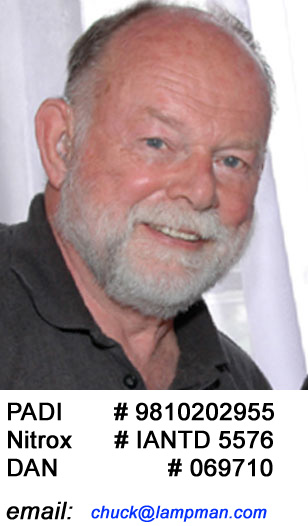 Chuck was a Naval officer for the first 22 years of his adult life, and fell in love with the underwater world while stationed at Subic Bay, Philippines, in 1970. Retiring from the Navy in 1982 and going to work for the VP for Research at Georgia Tech, he fell in with a bad crowd that included a certain Cuban dive instructor. He was certified by him in 1986, and has been actively diving ever since, doing two to four dive trips per year until the last five, when he has tapered off just a little. “It’s not the diving that’s slowing me down, it’s getting back on the d**ned boat!”

He's logged 1200+ dives in lots of far-off places, and some not so far-off. He has done liveaboards and dive resorts in Australia, Papua New Guinea, Belize, Sea of Cortez, Raja Ampat, Wakatobi, Yap, Palau and Fiji, and has dived most of the prime spots in the Caribbean, including Bimini about 20 times!

Chuck is a Rescue Diver, was Nitrox certified in 1993 when Nitrox was still “devil gas,” and was Cave certified in Akumal, Mexico and Florida through Apprentice Cave. Toting a camera along has been second nature for about 30 years, and he finally converted from a Nikonos V to a housed digital SLR in 2005. His favorite place to dive- "The last place I dove- usually."


“ “When you come to me with a problem, and don’t have a recommended solution, you become part of the problem.” ”

Back to the History Page