About Us | Our History Part 2 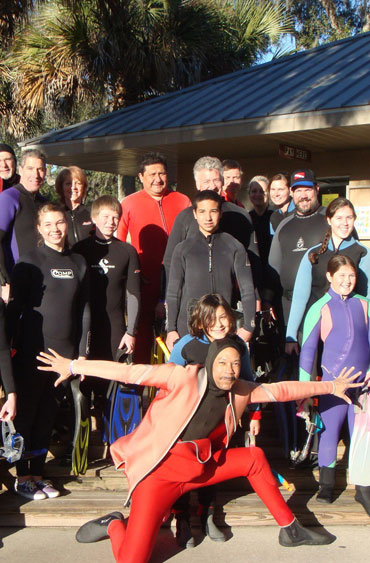 By 1995 Seven Seas Divers had grown into a small community network that numbered in excess of 1000 divers but other interests were beginning to emerge. Jim began to realize that like him many of his divers loved to snow ski, mountain bike, golf and trail hike so he decided to try an experiment.

The "First Annual Snow Ski Extravaganza" was scheduled for that winter and eleven diver-types took on the challenge - after all - snow is frozen water. Since then the ski trips have become an annual event. Then there were the mountain bike weekends on single track, the over night hikes in North Georgia, white water trips on the Ocoee, par 3-hole sponsorships at several golf tournaments, an African adventure to include climbing Kilmanjaro, a safari in the Serengeti and many other adventures.

Scuba was and is still the core of the community but what is clear is that Atlanta is an adventure capital and we have decided to take that seriously.

In 2005 Seven Seas Divers officially filed papers with the Secretary of State to change their corporate name from Seven Seas Divers, Inc. to Venturetrek, Inc. and the corporate mission expanded to multi-adventure training and travel. Jim and his wife Cindy operate venturetrek with the goal of having fun and establishing amazing long-term relationships and turning folks on to the adventures of their lives.

Jim is also the co-founder of the Ga Tech Scuba program known as GTScuba (which was originally a collaboration between Georgia Tech Professional Education (GTPE) and the Campus Recreation Center (CRC). He also served as the Faculty Advisor for the Scuba Tech club and led all recreational scuba initiatives at GaTech until 2019 when Jim retired and handed over the prpogram to the administration.

Since it's inception, the GTScuba program has grown exponentially and has gained a reputation as one of the best university-led scuba training programs, with one of the best aquatics facility, years of collective instructional experience and multitude of instructor led certification trips - put it all in a can, shake it up and what do you have. Total magic...

back to the Beginning

Atlanta is a gateway to great scuba, snorkeling and snow-skiing destinations as well as some of the best wilderness adventure destinations around. Locally, there are amazing road and mountain biking opportunities, back-packing and day-hiking, tubing, white water and of course golf courses galore. Venturetrek plans to continue tapping into the best of each.

Membership is easy and its free. Simply stated all you have to do is sign up through the Membership link above so that we can alert you to any of our planned events. We also understand that all of us get way too much spam so we promise to not inendate you with that. The occasional eBlast is all that you should expect from us. The rest is up to you. You'll either want to know more or you won't. No additional follow ups.

This is a special group within our large family and you can become part of it by simply participating in any of our long-range international excursions. That's all it takes. The "WTF" (yes you heard that right) gets first notifications of the big trips and gets first shot. This special group of people have experienced some amazing adventures to places such as Africa, Australia, Micronesia, Indonesia, New Guinea, Guadalupe, Sea of Cortez, and all over the Caribbean.