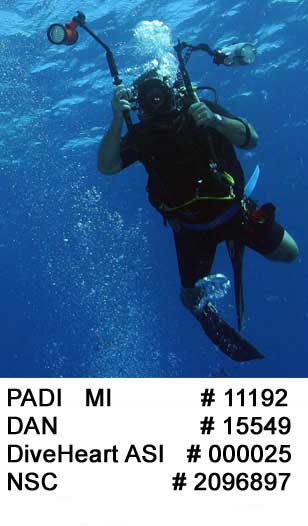 Jim holds several Instructor ratings including the highest teaching certification given by the Professional Association of Diving Instructors "Master Instructor".

Jim began diving at the age of 9 when diving meant slapping on a mask, taping up the dual-hose regulator with the hole in it, scraping the rust off of a tank in the corner and then just going for it.

Needless to say, he was young and a bit stupid. A lot has changed - well at least the "young" part has. He became an SSI instructor in 1975 in Ft. Lauderdale and then crossed over as a PADI instructor in 1978. In 1981 he moved to the land-locked city of Atlanta, Georgia and in 1983 took a job at Georgia Tech. Teaching scuba however was never far from his mind.

He soon began teaching scuba part-time for Jack Foster at Sandy Springs Divers following Jon Coon who moved on to become the PADI Regional Course Director. In 1986 Jim founded Seven Seas Divers as a psuedo dive-club for training and travel and in 2005 expanded into what is now Venturetrek, Inc. with a new focus on multi-adventure training and travel.

Jim's' 50+ years of diving experience has earned him a reputation for quality and excellence.". Jim is one of the original volunteer divers (2nd group) for the Georgia Aquarium, the Director for the Georgia Tech SCUBA program and the faculty advisor for the SCUBATech diving club from 2009-2019. Today his primary training efforts are in support of the GTscuba mission which allows him the privilege of working with a top-notched group of instructors as they continue to introduce the amazing world of diving.

“ Stay close to the candles. The stairway can be... treacherous. ”

Back to the History Page