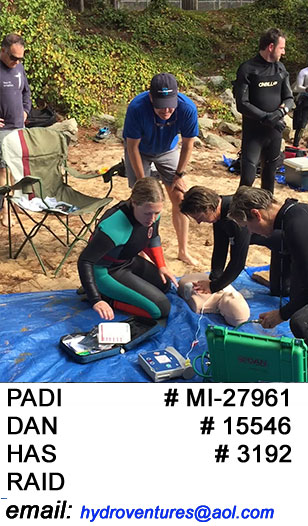 Scott Peters grew up in the small, land-locked city of Dublin, GA where an open water adventure typically meant skimming rocks across the farm pond, or swinging on a rope into the Oconee River. But none of that stopped Scott from reading stories and tales of underwater adventures.

A whole new world opened up for him when at an early age, he strapped on his first mask and snorkel while visiting his favorite open water dive site....His 500 gallon galvanized-steel cattle watering trough. Scott can remember watching television shows from diving legends such as Jaques Cousteau and the like as they explored the underwater world. But it was the “Flipper” TV series that was the real attraction for him.The adventures of brothers Bud, Sandy, and their pet dolphin Flipper..all down in the FL Keys..that had to be the life for Scott. So he promised himself that one day - one day he would experience all of that. In 1983 while in college at UGA, he got that chance and literally "dove right in" and signed up for a scuba course that was being offered.

After getting open water certified at King’s Spring in Crystal River,FL, Scott found himself so addicted that he went diving at every opportunity that he was given (or could afford). In order to support his “diving” habit, he began working for Venture Out dive shop in Athens and Buckhead. Scott was so taken by the sport that he even left school temporarily in 1987 to attend PADI International College in California. He graduated as a PADI Master Scuba Diver Trainer that summer. He returned to Athens and began working as an instructor at Charbon’s Specialty Sports.

Now some 30 plus years later, Scott is still actively teaching divers at all levels. He holds a PADI Master Instructor certification which is the highest teaching certification given by the Professional Association of Diving Instructors and has earned PADI's Elite Instructor status annually since PADI began awarding the achievement in 2012.

In early 2010 Scott became a staff instructor at Ga Tech and continues to teach at all levels. You can typically find him teaching the Advanced and Nitrox courses (Scuba2) as well as DAN's O2 Provider classes. Scott is a DAN instructor, Handicapped Scuba Association instructor and a RAID Closed-Circuit Rebreather Instructor.

Scott also works with the Georgia Aquarium's Dive Immersion, Veterans Immersion, and CCR Discovery Dive programs, where he has been introducing non-divers and divers alike to amazing animal encounters in the only place in the world where you are guaranteed to swim with whale sharks, the Ocean Voyager exhibit built by The Home Depot.


“ Real adventure is never fun when its happening! So I rarely have any fun. ”