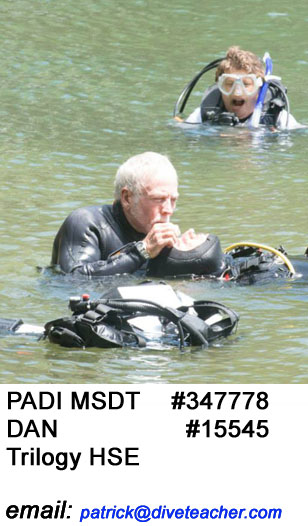 Patrick is a PADI Master Scuba Diver Trainer, teaches first aid, CPR and related lifesaving programs through the Divers Alert Network and PADI. He is also a volunteer as a diver and first aid instructor at the Georgia Aquarium.

Patrick first started scuba diving in 1974, when he was 16 years old, growing up in East Tennessee with those great summer trips to the beach. He was mesmerized by the burgeoning scuba culture that existed at the time, replete with Lloyd Bridges (“Sea Hunt”), Flipper, Voyage to the Bottom of the Sea and, Jacques Cousteau. Diving had such an impact on him that he strove initially to become a marine biologist. He succeeded in getting a Bachelor’s degree in Biology, with a minor in Chemistry, from Vanderbilt University in 1980, with emphasis in Marine Biology and Ecology. He did course work at the Duke University Marine Lab in Beaufort, North Carolina and the Dauphin Island Marine Lab on Dauphin Island, Alabama; fantastic adventures.

However, as his undergraduate career came to an end, so did the available job market for people with general biology degrees who were not particularly interested in going to medical school.

He pursued his other passion: Law and received his J.D. Degree, also from Vanderbilt University, in 1983. Patrick loves practicing law. Law also feeds and supports his other obsession: Scuba diving. A few years ago, Patrick decided that he wanted to take his diving career to a new level, and become a dive leader. He was accepted into the dive leadership program at the Georgia Institute of Technology and has become one of the senior instructors in the program.

“ For me, it is not merely a hobby or a past-time. I have seen it change lives, as it changed mine. The undersea world really opens your eyes to a better awareness of yourself as part of the global organism that is our planet. It lets you to test yourself in ways that you don’t imagine on land. You learn discipline, self-reliance, and awareness of and responsibility for others diving with you and around you. Along the way, you have a darned good time, see beautiful things, go to some awe-inspiring places, and you meet some really great folks. I decided that I wanted to “give back” to diving and help others experience what has given me such joy. I decided to become a diving instructor. ”